Here you can listen to different Morse codes. Give it a try; can you understand the message? To decode it you can use the Morse code module below.

The first electromagnetic telegraph was built in 1833. It was only possible to send pulses of variable length with this device. Therefore, characters had to be translated into sequence of short and long pulses. In 1909, the signal "SOS" had been signaled for the first time on the high sea with such a device.

The Morse alphabet consists of dots and dashes. Characters and symbols can be translated into a constant signal. This can be a floodlight for example. A short flash stands for a dot and a long one stands for a dash. 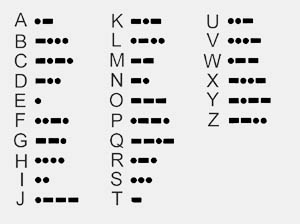