CrypTool was awarded the Selected Landmark in the section Science & Technology as a project with innovative ideas, courage for the future as well as sustained activity of implementation. The term "landmark" is used to describe initiatives that develop and create innovations and ideas.
The result of the CrypTool project is now used in many universities and in many companies worldwide. The project was presented at a big public event at the University of Siegen on July, 22nd, 2008. The Institute of Information Systems at the University of Siegen was the awarded landmark. Click here for more information.

CrypTool was a finalist at the European Information Security Award 2004 (EISA 2004) in the category Education and Training. This award was given at the conference RSA-Europe in Barcelona, hosted by RSA Security Inc. It is the largest European IT Security conference.

Nov. 11, 2004: CrypTool and the Institute of Information Systems (University of Siegen) received the IT Security Award NRW 2004 at the 3rd IT-Sicherheitstag NRW in the category Education (eLearning / knowledge transfer in cryptology). The German-language conference "3rd IT-Sicherheitstag NRW" was held in Duesseldorf and hosted by the Ministry of Economics of Northrine-Westphalia and by the initiative secure-it.nrw. 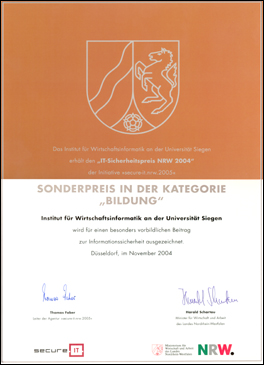 Sep. 29, 2004: At the ISSE conference the CrypTool project and its head Prof. Bernhard Esslinger were conferred the TeleTrusT Special Award for education in cryptography and promoting acceptance, awareness and understanding of cryptographic methods. The conference ISSE 2004 was held in Berlin, hosted by TeleTrusT and EEMA. It is the second largest IT security conference in Europe. 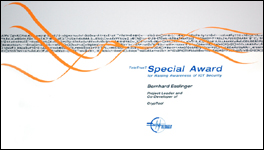